SARASOTA COUNTY — Developer Gary Kompothecras is pitching a seven-story, 120-room hotel at Old Stickney Point and Peacock roads that may usher in a hotel renaissance on Siesta Key, and he’s seeking the community’s help to craft his project.

The problem? Neither Kompathecras or his team has formally indicated when they wanted residents to show up to provide feedback, something that has riled stakeholders and made some legal experts question whether this is a violation of Florida’s open government laws.

A published notice by the developer indicated the meeting date was to be determined. But according to Sarasota County, the meeting is proceeding as planned on Wednesday.

Florida requires local governments and other public agencies to publish notices of meetings, hearings and workshops seven days before the event.

Workshops are also required in the early stages of the local development process and help county staff formulate suggestions for elected officials to consider before they make a final decision on a development proposal.

Robert Medred, the head of Genesis Planning and Development, applied for the workshop on behalf of Kompothecras, the founder of 1-800 Ask Gary and prominent Republican donor.

While Medred did publish a notice of the workshop on Nov. 20 in the Herald-Tribune, the notice only indicated that the meeting “will be held via Zoom on November TBD” at 6 p.m.

A review of the county’s public meeting calendar on its website, which was linked in the notice, did not initially list any information about the public workshop. The county only recently included the workshop on its calendar.

Michael Barfield, a paralegal and Florida public records expert, says that dates are required on notices and to not include them is a violation of Florida’s open records laws.

“There are rules for giving a date on the notice,” said Barfield. “Otherwise, how would the public know where to show up and when to go?”

The county, however, disagrees.

“This is not a Sunshine violation as this is not an advertisement for a public hearing,” said Michele Norton, the county’s senior planning and zoning manager. “It’s an advertising error that requires the applicant to start that advertisement process over, as a date and time are required.”

Norton said that Medred “erroneously posted the wrong advertisement” and would have to re-advertise that the posted meeting will take place on Wednesday.

But Medred hasn’t started the advertisement process over again and is pressing ahead with Wednesday, the date he initially included on his application that was filed and approved by the county, records show.

In advance of the meeting, Kompothecras’ development team is also required to send out mailing notice to property owners within 750 feet of the project.

They are also required to send notice of the meeting 10 days in advance.

Anecdotally, few, if any, of the stakeholders have received any notice, said Mark Spiegel, who represents the Siesta Key Coalition, one of several groups opposing the project. 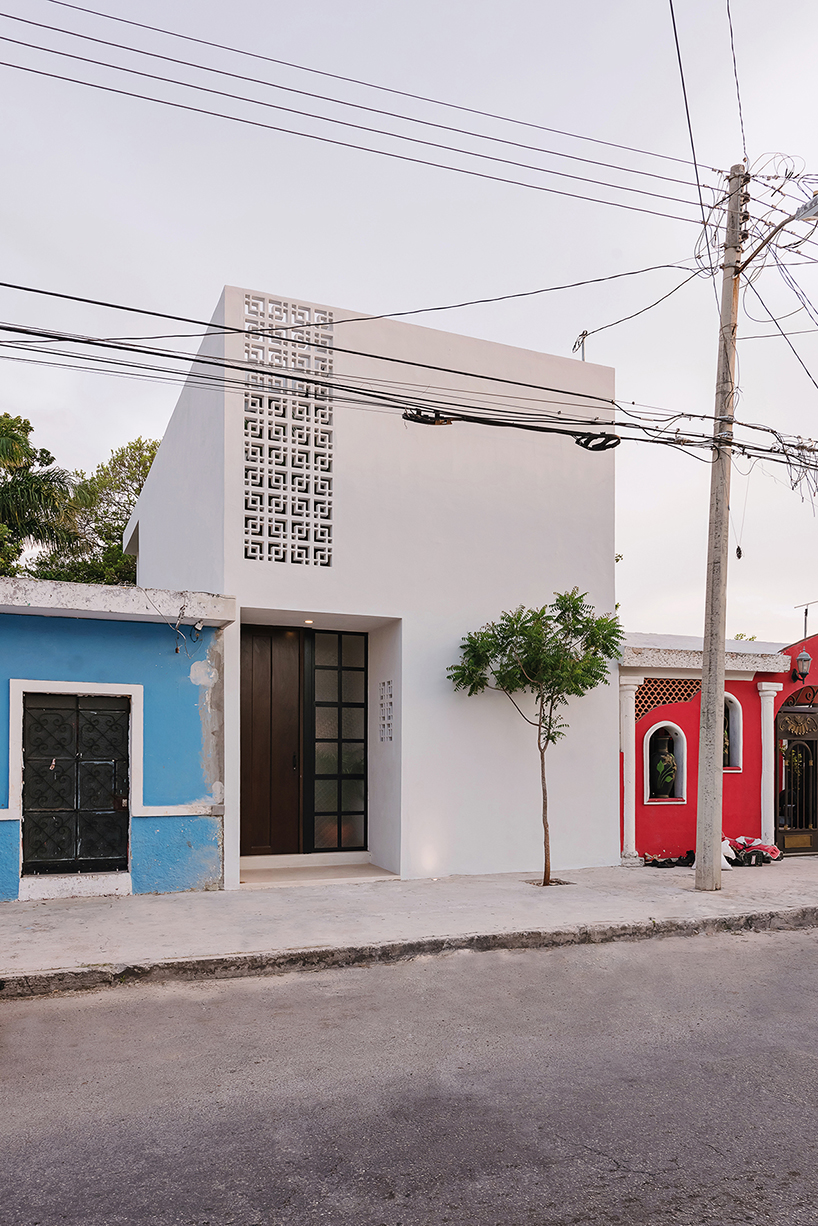 upon entering the house by workshop: diseño y construcción, guests are welcomed by a small kitchen area with pasta tile accents, that integrates into a dining room for two. this double-height space invites occupants to enjoy the views of the gardens, where a small ‘chukum’ pool surrounds the terrace, creating an ideal atmosphere for enjoying the warm climate. at the end of the lot, the service area is hidden behind an old colonial door and a stone façade, which serves as a focal point to the terrace. 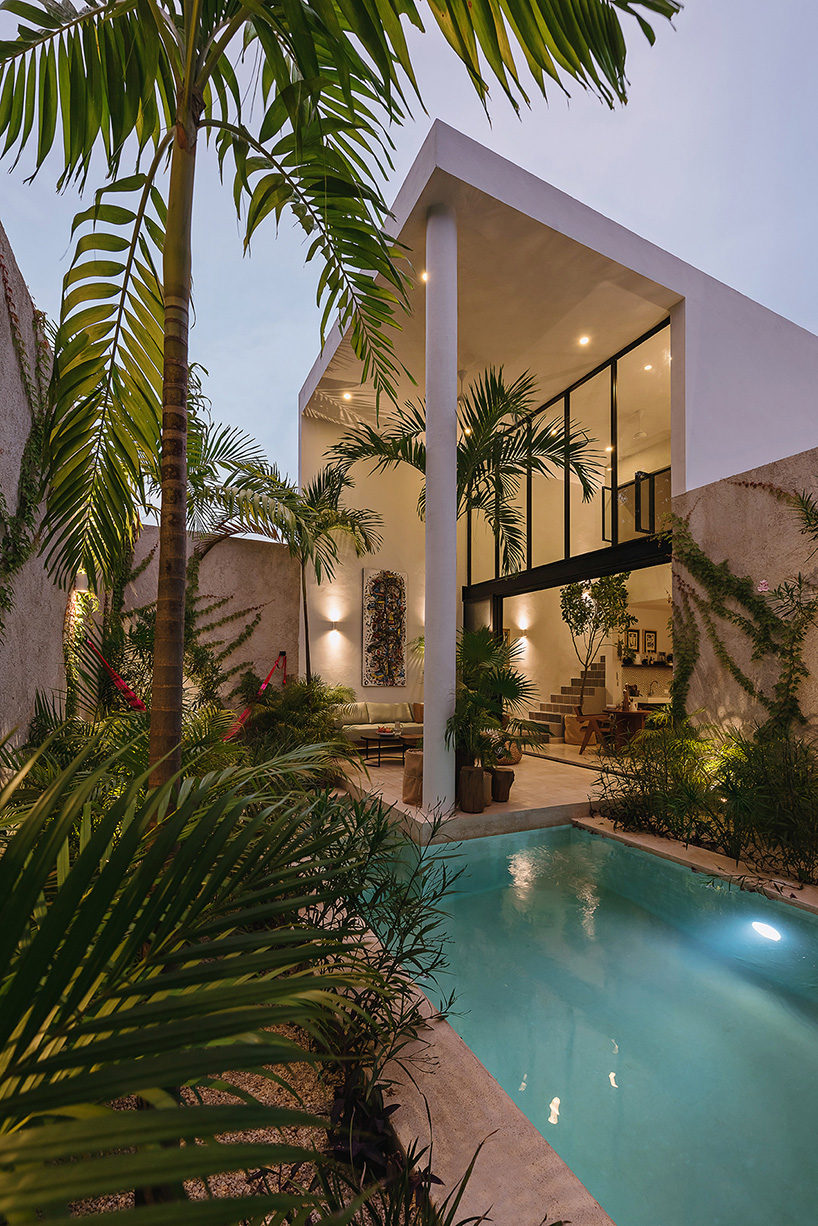 the only bedroom of the house is located in the mezzanine above the kitchen. it includes a complete bathroom facing a small garden, where the lattices of the facade allow the prevailing north winds to travel through the house. from the bedroom, there is a privileged view towards the treetops from the patios of the adjoining dwellings, which are representative of the traditional neighborhood. 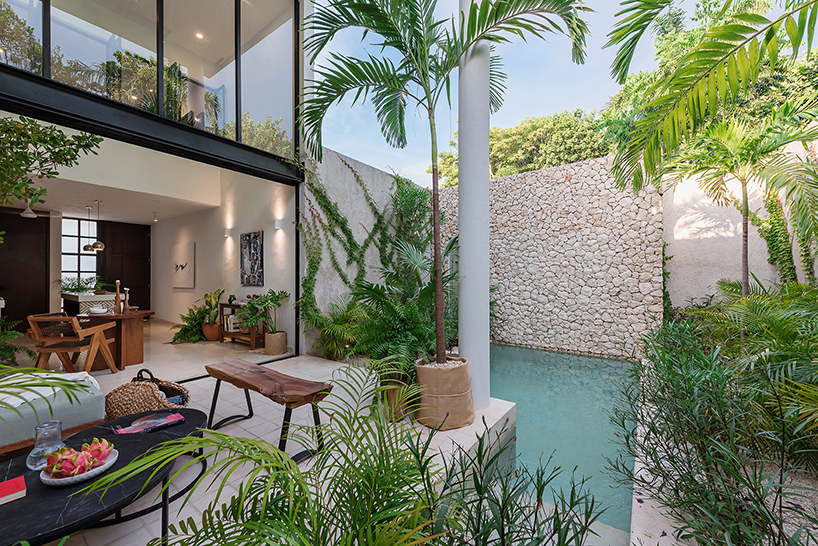 through the use of traditional materials and the incorporation of contemporary elements, the design generates an original living environment that still reminds of the long-established regional architecture. the transparent glass materiality, the neutral color palette, the wooden furniture, and the vegetation that is distributed throughout the interior, create an atmosphere of freshness in this little tropical corner. 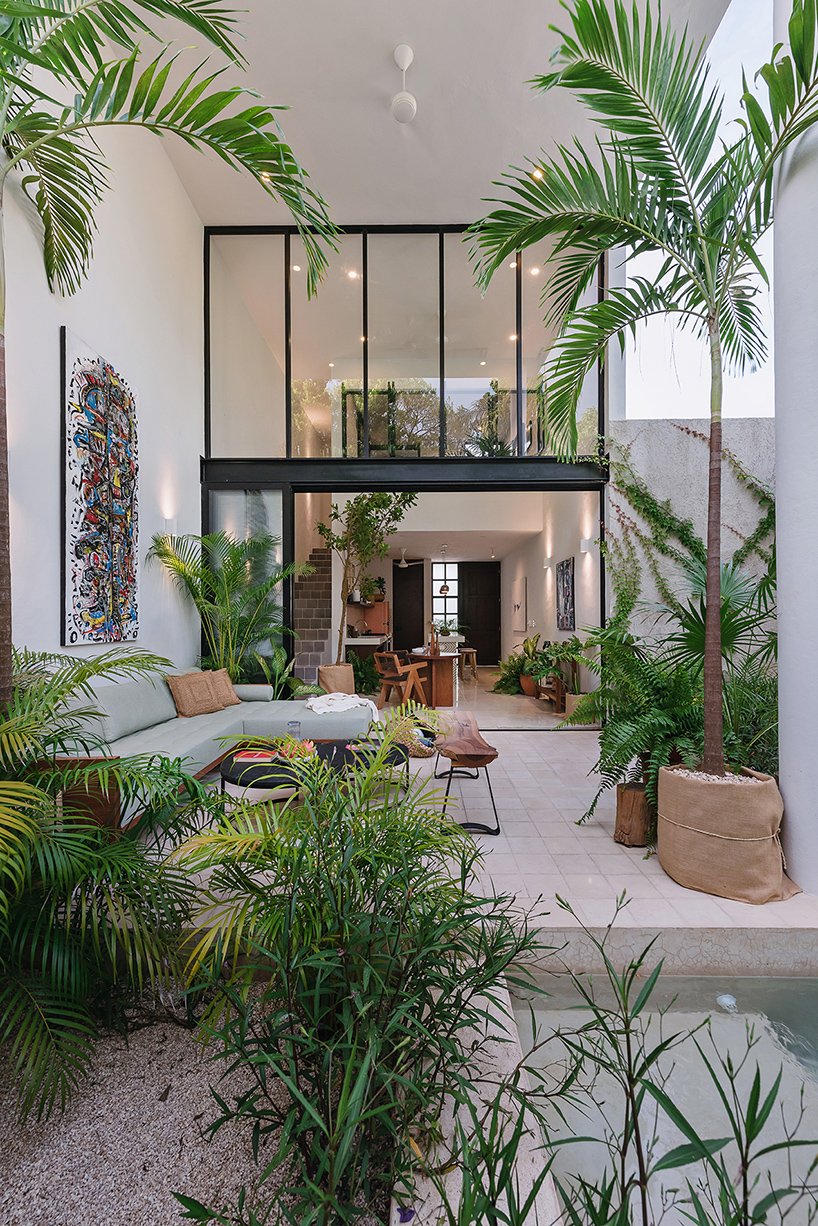 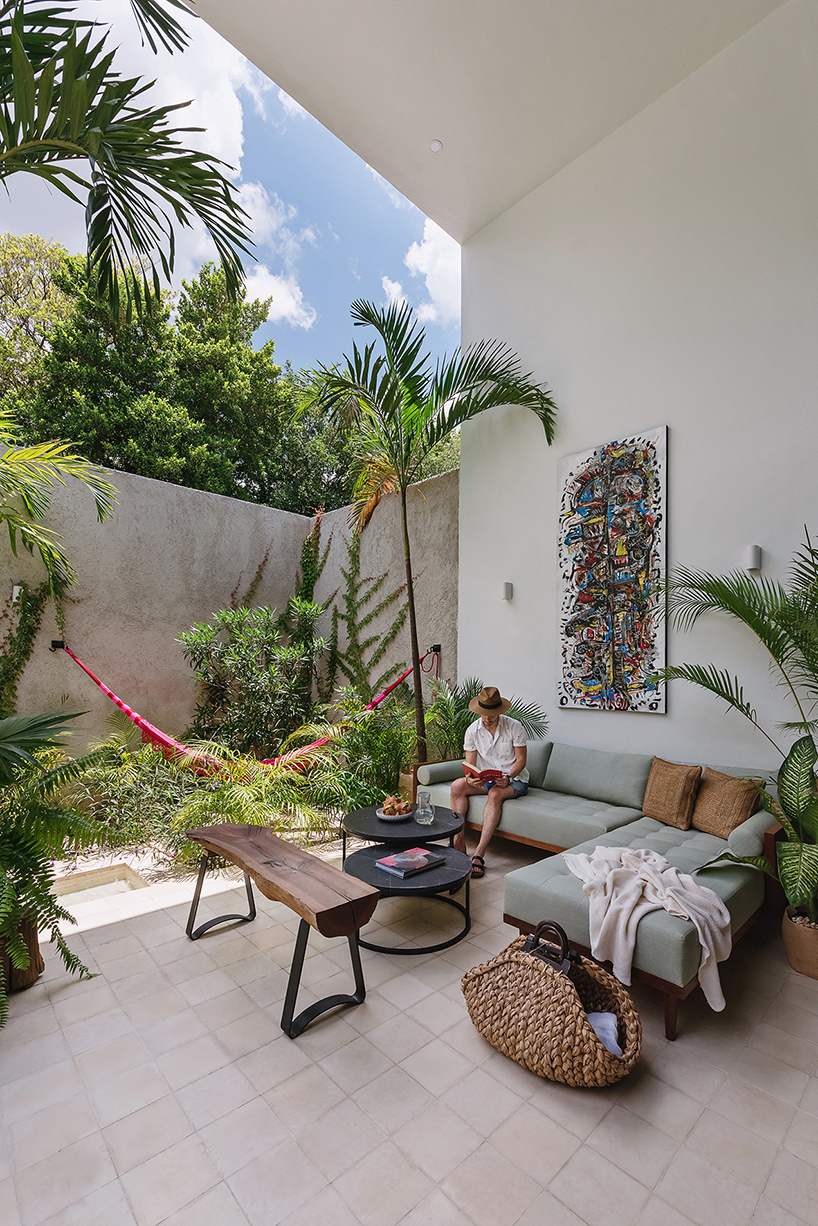 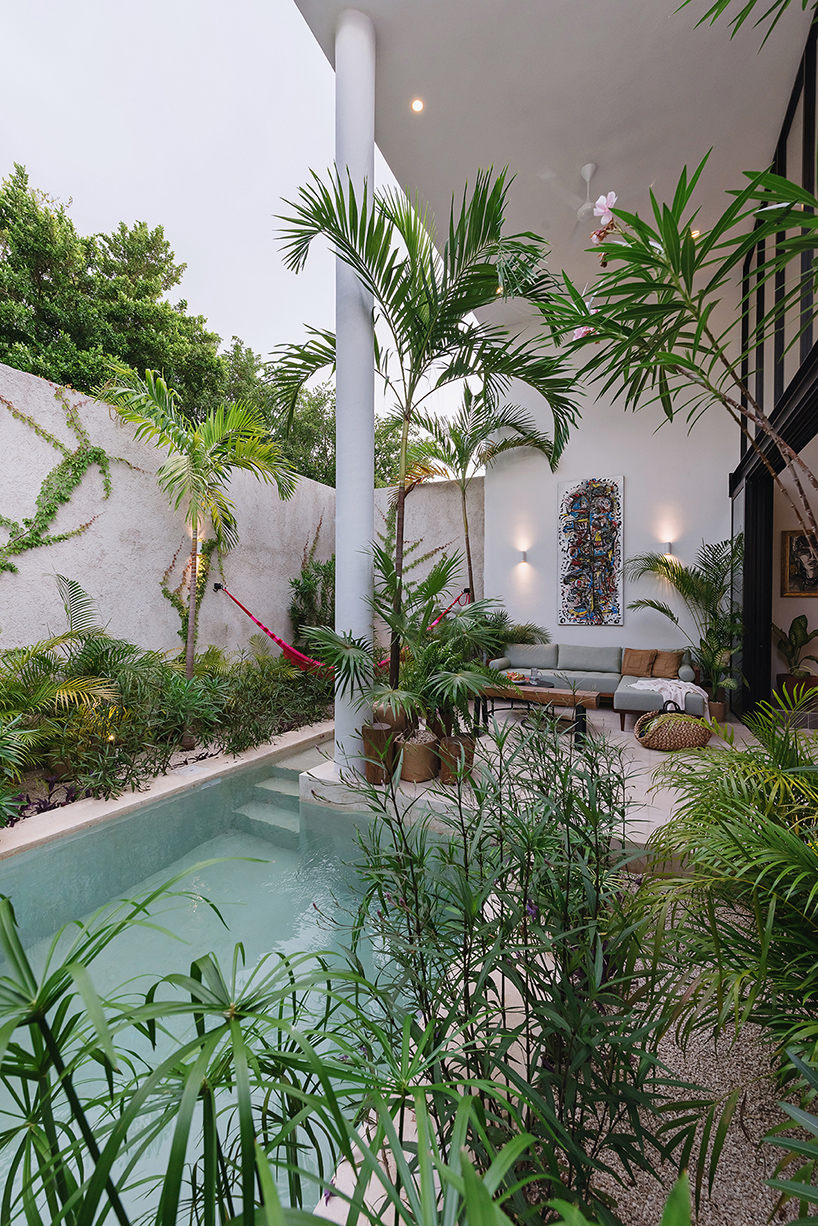 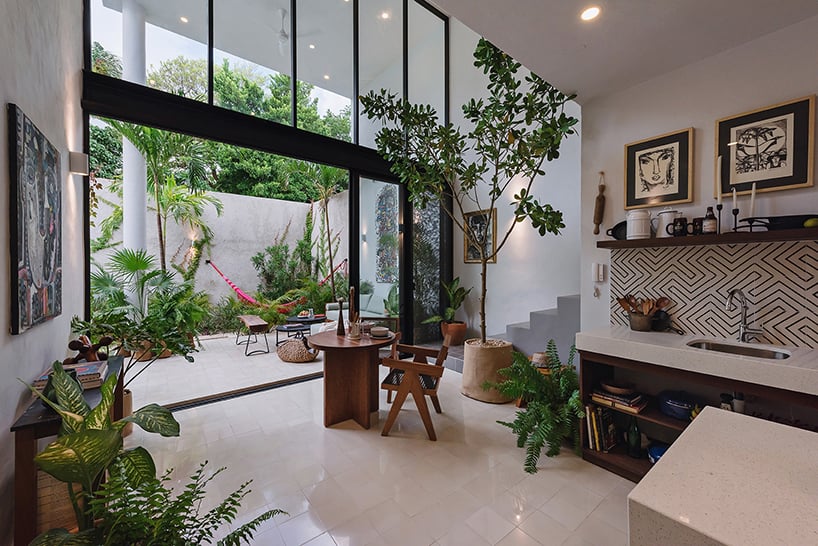 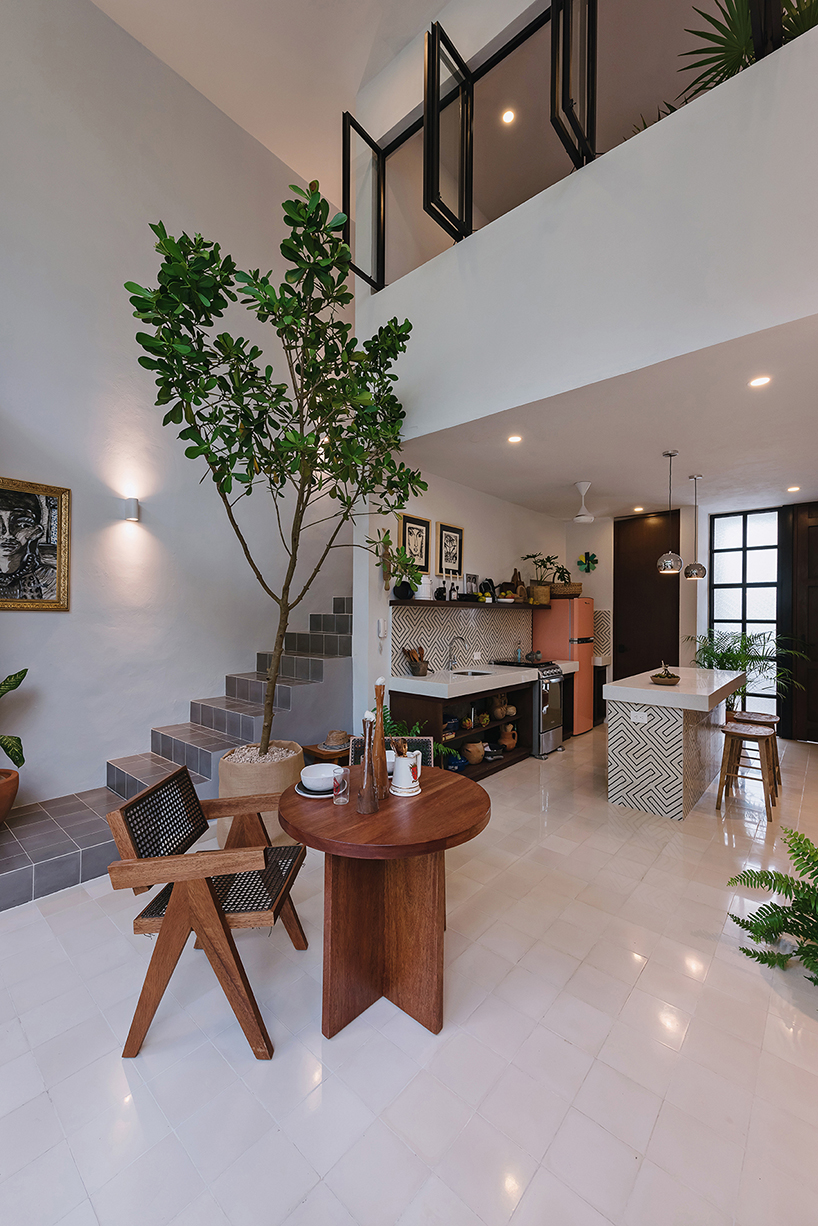 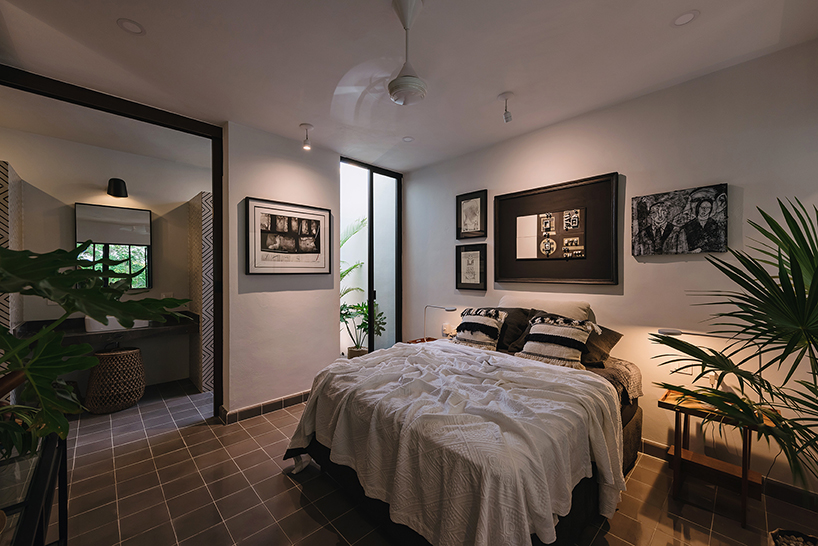 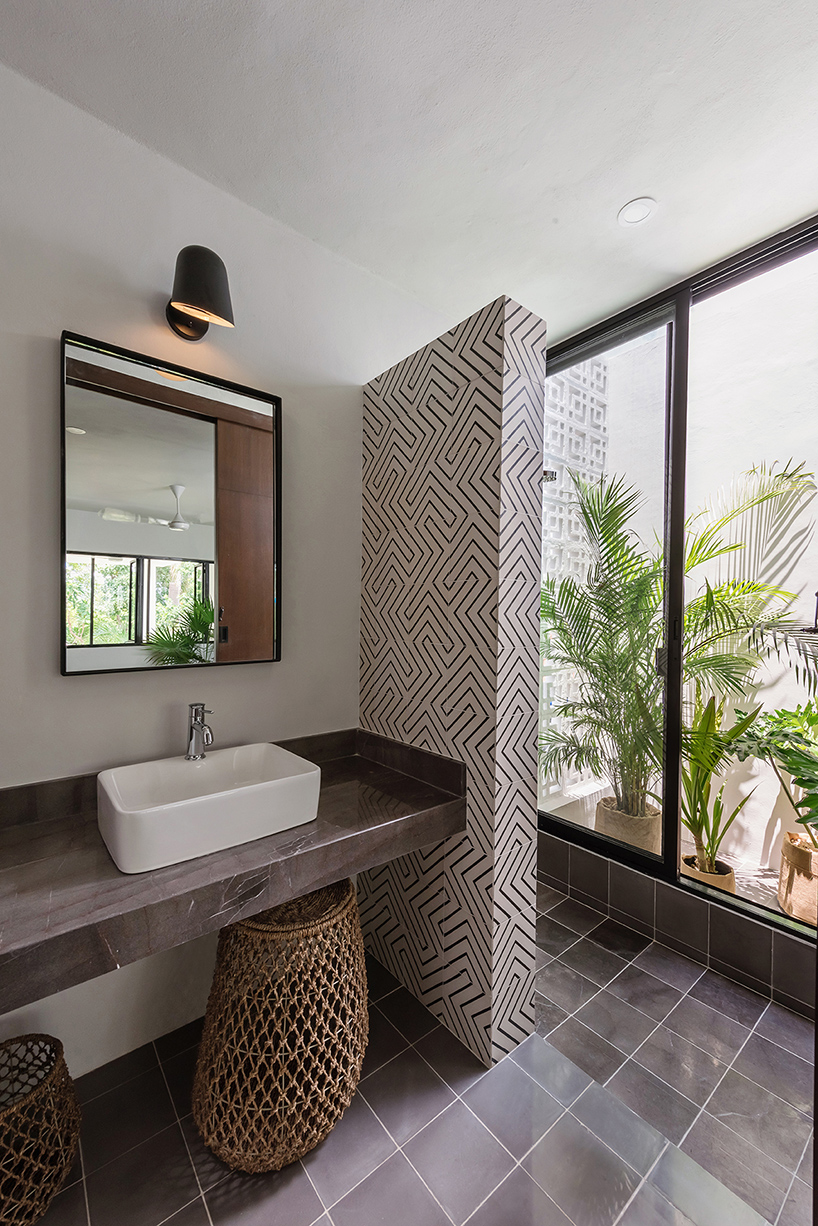 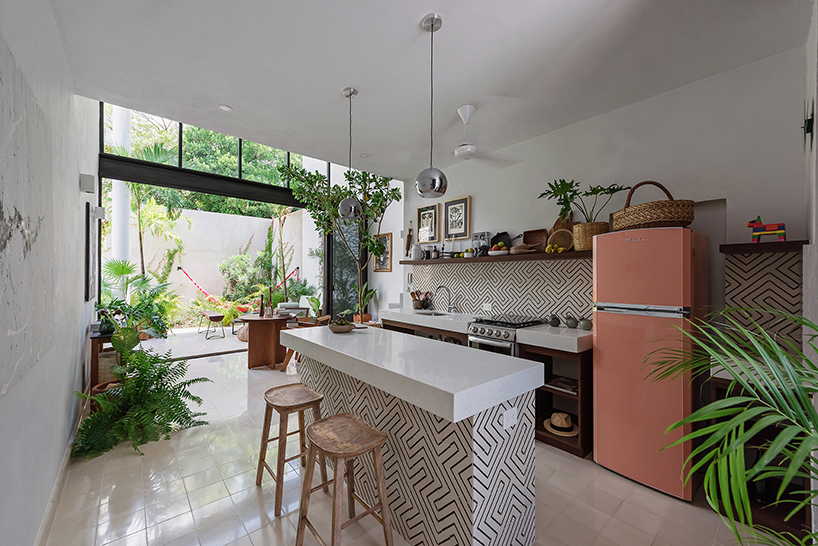 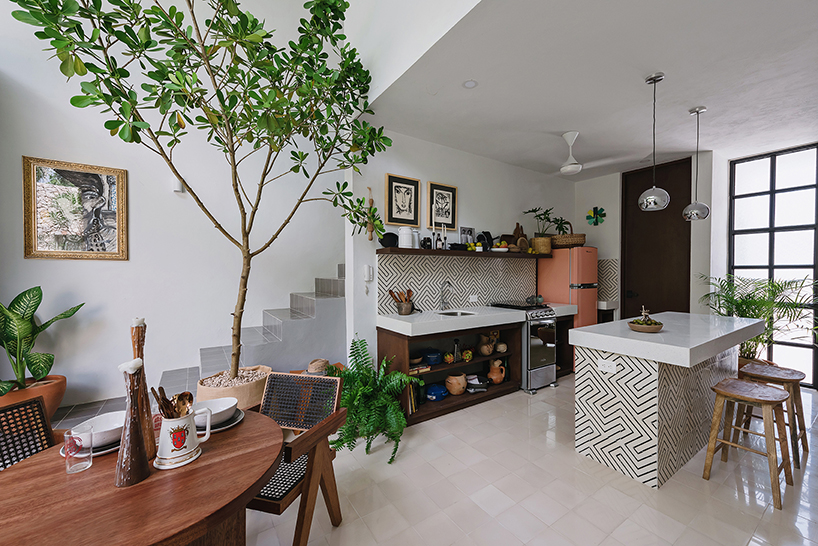