TAIPEI, Nov. 30, 2020 /PRNewswire/ — The Asia Super Team competition, organized by “Taiwan’s Bureau of Foreign Trade“, “Ministry of Economic Affairs“ and executed by “Taiwan External Trade Development Council“, promotes incentive travel in Taiwan by revealing Taiwan’s numerous attractions through a variety of different themes and contests since 2013. At the 2020 championship press conference on November 26, results of the event’s Asia Incentive Tourism Destination in the Post-Pandemic Era Survey were announced, in addition to the champion team — JTB Global Marketing & Travel from Japan, winning an incentive travel package valued at US$50,000. 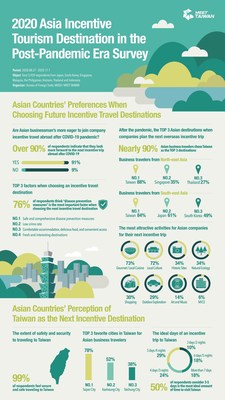 Of particular note, more than 80% of Asian business travelers will prioritize the integrity of local disease prevention measures when they participate in future incentive travel, and public security will be a second priority; this shows that the pandemic has prompted companies to focus on safety factors when choosing their next incentive travel destination. Statistically, Taiwan is rated as the top destination for incentive travel among Asian companies and countries due to its rich tourism resources and spectacular disease prevention success. Up to 99% of business travelers expressed confidence in Taiwan’s disease prevention and safety, which will be a boon to the country’s tourism after the epidemic.

With regard to incentive travel itineraries, most survey respondents expressed their preferences for cuisine and local cultural experiences, followed by sights of historical significance. The survey answers will assist Taiwan with future preparation and marketing after the epidemic, in addition to serving as reference for other interested international destination providers. The Asia Super Team competition continues to achieve breakthroughs and innovations. It has attracted multiple target markets through diverse, creative, and integrated marketing. The continued implementation of creative marketing contributes to making Taiwan a prime destination for exhibitions and incentive travel in Asia.

This year saw Asia Super Team held as an exclusively online competition for the first time. Elite corporations from Japan, Korea, Singapore, Malaysia, Indonesia, Thailand, Philippines, and Vietnam participated in the event, completing the online Reach for the Stars challenge in a week-long contest. The onslaught of COVID-19 was overcome by developing a brand-new format of innovative competition that overturned past approaches, using novel technological elements and digital tools to promote and generate buzz

Comments from an American Express executive are raising concerns that formerly frequent travelers are accumulating large amounts of miles and points in airline and hotel loyalty programs but not using them – for now.

Once a COVID-19 vaccine becomes widely available, that could lead to a sudden rush to claim free flights and rooms, putting a strain on the availability of those rewards.

According to Bloomberg News, AmEx Chief Financial Officer Jeff Campbell said at a conference that users of his company’s own Platinum and Gold cards as well as the co-branded cards it provides to major travel companies have been hoarding a growing number of points and miles as the pandemic continues to depress travel, which seems to be the preferred redemption goal for those cardholders.

He noted that they could use their card-earned credits to shop online for merchandise or other things, but they’re not. “They’re just stocking up the points to travel,” he said.

Don’t miss a shred of important travel news! Sign up for our FREE weekly email alerts.

Campbell said he sees the current aversion to claiming reward trips as just “a fairly temporary change in the way people are going to spend. … The human urge to travel — to gather, to explore — is insatiable.”

The question is, what will finally renew their demand for award travel? How soon will it happen, and will the travel industry be prepared to satisfy it if it comes in a big rush? It could depend, too, on when and to what extent various countries relax their current pandemic-related entry restrictions.

Business travel writer Joe Brancatelli replied: “If you’re hoarding points now, you’re doing it wrong. Virtually ALL people should switch to cashback cards for the foreseeable future. The payoff is better, more immediate and easier. Only dedicated gamers will win the airline game. Average users will be losers.”

What about you, readers? Are you stocking up on credit card/airline/hotel points/miles? If so, how do you hope to use them, and when?

Don’t miss a shred of important travel news by signing up for FREE weekly email updates!

SFGATE participates in various affiliate marketing programs, which means we may get paid commissions on editorially chosen products purchased through our links to retailer sites.

END_OF_DOCUMENT_TOKEN_TO_BE_REPLACED

The sweeping changes we’ve seen this year to office work and business travel won’t go away, even after the pandemic subsides, according to Bill Gates.

Gates described how he envisions the future of work during an interview with Andrew Ross Sorkin at The New York Times DealBook conference on Tuesday. According to Gates, one of the biggest changes to how business is conducted will have to do with work-related travel.

“My prediction would be that over 50% of business travel and over 30% of days in the office will go away,” Gates said.

The type of business travel where it’s important to fly somewhere to physically sit in front of someone else to discuss something in person won’t be the “gold standard” anymore, Gates said. He predicts most companies will have a “very high threshold” for doing those types of business trips.

When it comes to working from home, “some companies will be extreme on one end or the other,” Gates said, likely alluding to companies like Twitter, who have said their employees may work remotely forever, from anywhere.

Gates did reveal one downside of virtual meetings versus in-person events: the inability to meet new people. He told Sorkin that he hasn’t made new friends this year because he never meets people at random.

“More could be done on the software side to allow for serendipitous run-ins after meetings,” Gates said.

Many companies, particularly those in the tech world, from which Gates hails, are reconsidering the future of work now the the pandemic has shut down the majority of travel and in-office work this year. Twitter isn’t the only company who has said employees never need to return to the office: Slack, Stripe, and Facebook have all said employees may relocate away from company headquarters, though in some cases, they’ll take pay cuts.

At Microsoft, the company Gates founded with Paul Allen in 1975, employees will shift to a “hybrid workplace” where they’ll only report to the office for half the workweek.

Gates’ predictions on business travel line up with research from industry experts, who have estimated that it will likely take several years to return to pre-pandemic levels. According to Bank of America research from October, corporate travel is unlikely to rebound until “late 2023 or

A partner account executive at a U.S. tech company, Contreras was used to traveling frequently for his employer. But nine months into the pandemic, he and thousands of others are working from home and dialing into video conferences instead of boarding planes.

Contreras manages his North American accounts from Sacramento and doesn’t expect to travel for work until the middle of next year. Even then, he’s not sure how much he will need to.

“Maybe it’s just the acceptance of the new normal. I have all of the resources necessary to be on the calls, all of the communicative devices to make sure I can do my job,” he said. “There’s an element of face-to-face that’s necessary, but I would be OK without it.”

That trend could spell big trouble for hotels, airlines, convention centers and other industries that rely so heavily on business travelers like Contreras.

Work travel represented 21% of the $8.9 trillion spent on global travel and tourism in 2019, according to the World Travel and Tourism Council.

Delta Air Lines Chief Executive Ed Bastian recently suggested business travel might settle into a “new normal” that is 10% to 20% lower than it used to be.

“I do think corporate travel is going to come back faster than people suspect. I just don’t know if it will be come back to the full volume,” Bastian told the Associated Press. Right now, Delta’s business travel revenue is down 85%.

MBC Group, a Dubai company that operates 18 television stations, says it’s unlikely employees will travel as often once the pandemic ends because they’ve proved they don’t need to.

Amazon, which told it employees to stop traveling in March, says it has saved nearly $1 billion in travel expenses so far this year. The online shopping giant, with more than 1.1 million employees, is the second-largest employer in the U.S.

At Southwest Airlines, CEO Gary Kelly said that although overall passenger revenue is down 70%, business travel — normally more than one-third of Southwest’s traffic — is off 90%.

“I think that’s going to continue for a long time. I’m very confident it will recover and pass 2019 levels, I just don’t know when,” Kelly told the AP.

U.S. hotels relied on business travel for around half their revenue in 2019, or closer to 60% in big cities such as Washington, said Cindy Estis Green, the CEO of hospitality data firm Kalibri Labs.

Peter Belobaba, who teaches airline management at MIT, said business travel is down partly because some people are afraid to fly and partly because companies fear liability if employees contract COVID-19 while traveling for work.

Companies have also reined in travel because times are lean, he said. ExxonMobil cut business travel in February — even before