What 2020 championship season successfully navigated the Covid Era by requiring participants to live and compete in a rigorously maintained social bubble?

If you said the National Basketball Association, your answer is only half-baked.

Usually, the easy-to-watch show (don’t worry—there are no spoilers here) is set in a temporary tent on the grounds of Welford Park near Newbury, a 50-minute train ride west of London and not far from Downton Abbey‘s Highclere Castle. During normal seasons, contestants go about their regular lives during the weekdays and commute to the tent for tapings on weekends.

After 11 seasons, the show has become a pop culture institution in the United Kingdom, and producers felt it was crucial to keep baking and carry on, pandemic notwithstanding.

So they moved the set to the grounds of Down Hall Hotel & Spa, a gorgeous Victorian-era luxury retreat on 110 acres about 33 miles northeast of London. Instead of taping on weekends over the autumn, everyone involved with the show—cast, crew, judges—lived and cooked at the hotel in late summer.

For six weeks, cast and crew never went home, agreeing to regular viral testing and no outside contact. Each episode was shot over two days, followed by two days off, so the entire season was recorded much faster than usual, and with much more day-to-day intimacy between the participants.

The judges, Paul Hollywood and Prue Leith, had separate dining facilities from the contestants. Whenever a baker earns the rare compliment of a Paul Hollywood handshake this season, rest assured there was a team of health experts behind the camera ensuring that all shaken hands were well sanitized.

The show is currently airing on Channel 4 in the U.K. and streaming in the United States on Netflix. On screen, viewers see no evidence of the complexity and intensity of the production measures happening behind the scenes other than when, on one recent episode, a baker’s children appeared to congratulate them for a success. Normally, children remain back at home.

Fans of the baking competition weren’t previously able to stay overnight at the show’s home. But in a 2020 twist, TV’s endearingly bready tournament has unexpectedly given rise to England’s newest tourist attraction. 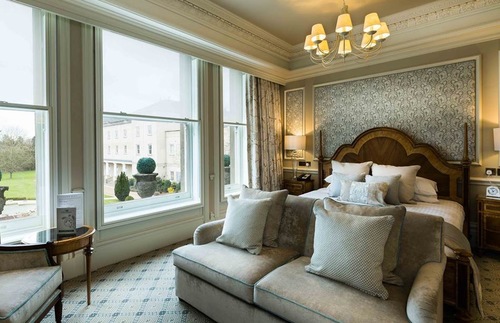 On your next trip to the United Kingdom, you, too, can stay at Down Hall (not to be confused with Down House, where Charles Darwin lived—but you can visit there as well).

The 98-bedroom Down Hall lies near the village of Bishop’s Stortford, which dates to Roman times at least. The hotel’s building replaced an earlier Tudor edifice in the 1860s. But unlike Downton‘s Highclere, the ruling family was unable to keep it going in changing times, so the estate was sold years