The travel advisories issued jointly late last week by the governors of California, Oregon and Washington are not expected to impact Pac-12 football teams located in those states.

The advisories “urge against non-essential out-of-state travel, ask people to self-quarantine for 14 days after arriving from another state or country and encourage residents to stay local,” according to a statement posted on the website of California Gov. Gavin Newsom.

A conference source pointed to the non-binding nature of the advisories and to the Pac-12’s health and safety precautions.

“We’re looking into it, but at this time we do not think this will impact our games as scheduled,” said the source, who requested anonymity because of the sensitive nature of the topic.

Conference policy requires all players and coaches to receive point-of-care testing the day of travel, with results available before prior to boarding or departure.

A spokesperson for Washington Gov. Jay Inslee seemed to support the conference’s position in a statement issued to KING 5 in Seattle:

“These are recommendations, not requirements, so there is not an enforcement element to this. Collegiate sports are already governed by their own health guidance and will continue to follow those protocols.”

While the travel advisories seemingly won’t affect the Pac-12, which has eight teams in the three states, there is less clarity on the potential impact of tightening local restrictions.

In the Bay Area, for example, Santa Clara County is expected to move to an elevated safety level this week — either Red Risk Tier or possibly the most extreme, the Purple Risk Tier, according to San Jose Mayor Sam Liccardo.

When the county was in Red in early October, Stanford was not permitted to practice on campus.

Instead, the Cardinal spent several days working out at Woodside High School in nearby San Mateo County.

It returned to campus for practice only when Santa Clara County dropped into the less-restrictive Orange Risk Tier.

Asked for the status of practices this week, the university issued the following statement:

“Stanford Athletics remains in contact with Santa Clara County as we strive to create an opportunity for all of our student-athletes to safely train and compete in their 2020-21 season.

“We appreciate the county’s continued leadership and remain prepared to adjust accordingly based on updated guidance.

“We will continue to evaluate the rapidly-changing landscape while prioritizing the safety, health and well-being of our entire community.”


Jon Wilner:
[email protected]; on Twitter: @wilnerhotline. Jon Wilner has been covering college sports for decades and is an AP top-25 football and basketball voter as well as a Heisman Trophy voter. He was named Beat Writer of the Year in 2013 by the Football Writers Association of America
… END_OF_DOCUMENT_TOKEN_TO_BE_REPLACED
CLOSE

The governors of Oregon, Washington and California issued travel advisories Friday morning urging visitors entering their states or returning home from travel outside these states to self-quarantine for 14 days, to slow the spread of coronavirus.

They also are urging people to avoid all non-essential out-of-state travel. 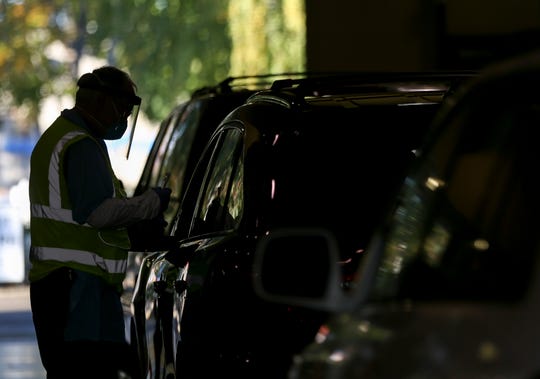 Patients are briefed about the COVID-19 testing process on at the Oregon State Fairgrounds during at testing event in late October. (Photo: ABIGAIL DOLLINS / STATESMAN JOURNAL)

“As hospitals across the West are stretched to capacity, we must take steps to ensure travelers are not bringing this disease home with them,” Oregon Gov. Kate Brown said in a news release.

Brown is expected to announce further restrictions at a noon press conference.

States across the country are smashing records for daily case counts, positive tests, hospitalizations and deaths.

California just surpassed a total of one million COVID-19 cases.

And cases have doubled in Washington over the past two weeks.

This is a developing story and will be updated.

END_OF_DOCUMENT_TOKEN_TO_BE_REPLACED

The Senate Republicans who have not conceded publicly that President-elect Joe Biden won the 2020 election argue that President Trump has the right to challenge the results in court, or point out that the vote totals haven’t been certified yet, or admit they need his voters to show up in Georgia’s special Senate elections, or privately acknowledge that they would pay a political price for not humoring Trump’s baseless fraud claims. Some say it’s best to let the courts swat down the fraud allegations so people who voted for Trump will feel assured the system worked.But this reason for letting “process run its course” posted by Sen. John Cornyn (R-Texas) on Thursday is new.> Another example of why it is prudent to let the process run its course: Thousands of Uncounted Votes Found a Week After Election in Puerto Rico https://t.co/YYxMhNSAdi> > — Senator John Cornyn (@JohnCornyn) November 12, 2020Puerto Rico, of course, doesn’t get to vote for president (or send members of Congress to Washington), so it wasn’t clear why Cornyn would bring up its uncounted votes. After getting needled for hours on Twitter, he said he wasn’t necessarily referring to the presidential race — though he did not explain what other “process” he had in mind. All other major races have been called and the losers conceded.> Neither the story or my comments are limited to presidential elections. fail https://t.co/RTQNk51ZIt> > — Senator John Cornyn (@JohnCornyn) November 13, 2020Cornyn, who won re-election last week, did send more subtle signals that he accepts the results of the election, retweeting two recaps of the Homeland Security Department’s cybersecurity agency affirming that “the Nov. 3 election was the most secure in American history” and “there is no evidence that any voting system deleted or lost votes, changed votes, or was in any way compromised.”More stories from theweek.com 7 scathingly funny cartoons about Trump’s refusal to concede Trump is reportedly ‘very aware’ he lost the election but is putting up a fight as ‘theater’ Obama says he is ‘troubled’ by GOP senators enabling Trump and his false election claims

END_OF_DOCUMENT_TOKEN_TO_BE_REPLACED

D.C. Mayor Muriel E. Bowser on Tuesday defended her decision to travel Saturday to Delaware, a state with significantly higher coronavirus risk than the District, to celebrate president-elect Joe Biden’s victory and meet with his staff.

The trip, which comes as the mayor attempts to discourage interstate travel because of the pandemic, prompted questions from reporters, and derision on social media from some residents and Bowser critics.

The mayor said she was “very proud” to attend the celebration in Wilmington, and that the trip “absolutely” qualified as “essential travel” — which is exempted from Bowser’s quarantine order — because she was conducting government business on the road.

It remained unclear Tuesday whether the mayor was tested for coronavirus after returning from her trip and before appearing in public, which her office advises for people who have come into the city from a high risk state.

Bowser and members of her staff, including deputy mayor John Falcicchio, conversed in Wilmington with Biden strategist Symone Sanders, along with watching the outdoor speeches by Biden and vice president-elect Kamala Harris. Bowser posted a photo of herself celebrating while wearing a mask — like everyone around her — and a “We are D.C.” scarf.

“We congratulated [Biden] team members that we saw,” Bowser said on Tuesday when reporters asked about the purpose and nature of the government business she conducted on the trip. “I congratulated the people that I saw. I had, recently, conversations with the transition team itself.”

She said that the District government will need to coordinate upcoming events with Biden’s staff. “Building a relationship with the new team is going to be important for all of us.”

After NBC4 reporter Mark Segraves tweeted Bowser’s photograph at the celebration, a flood of residents and others responded, most of them accusing the mayor of following different coronavirus safety protocols than what she preaches for residents.

WAMU reporter Martin Austermuhle posted that Bowser’s description of her trip “might be stretching the definition of ‘essential’ just a touch/whole lot.”

Until last week, Bowser’s mayoral order on interstate travel would have required anyone who visited Delaware (and other states with more than 10 new daily coronavirus cases on average per 100,000 residents) to quarantine at home for two weeks upon returning to the District, except those whose travel was for essential purposes.

Last week, however, Bowser replaced that order with a new one, getting rid