Dallas Stars owner Tom Gaglardi plans to break ground this before then end of the year on a luxury hotel in Las Colinas.

Gaglardi’s Northland Properties Corp. for more than a year has been planning h the 205-room, six-story hotel at State Highways 114 and 161 in Irving.

A filing for the first $18 million construction of the project was just filed with the state of Texas.

The hotel will include a 6,788 square-foot, 225‐seat Moxie’s Grill restaurant with an outdoor patio.

The Las Colinas hotel is one of the first Texas projects for Northland Properties’ hotel group.

The Canada-based Sandman Signature Hotel chain already operates a 233-room hotel in Plano, its first location in the U.S.

Gaglardi bought the Dallas Stars in 2011. His company operates a chain of Sandman and Sutton Place hotels in Canada, the U.K. and now Texas.

Along with the Sandman hotel, the surrounding Star Park development includes a 288-unit apartment community being built by Lincoln Property Co.

Lincoln Property also has a site for an office building in the project.

The Sandman Hotel is one of two new hotels on the way in the area. Type Six Design & Development has received zoning approval for a six-story, 150-room Hotel Indigo in Las Colinas.

Construction on the Indigo will start in the second quarter of 2021. 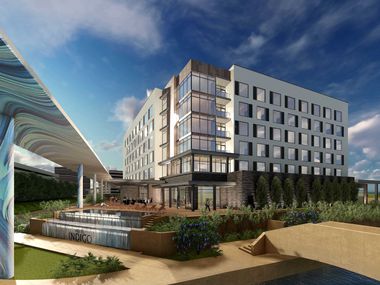